In addition to our daily story updates where we will let you know what kind of stories Magazines and Newspapers are looking for right now, we also want to give you a little insight into the world of Famous Features and real-life journalism.  We’ll be posting regular blogs to keep you up to date with what is going on in the office, the media, and the world of real-life stories (visit our home page to find out more about selling your story – click here)

So, you could say it’s a rather female-orientated environment here at Famous Features, where we work hard to sell your stories to top magazine and newspapers, including That’s Life!, Take A Break, Closer, and many more cornerstones of the national press.

We’ve turned the old adage of the world of journalism being one big ‘boy’s club’ completely on its head.

Not here it ain’t. Girls only (well nearly!).

You’d be hard pressed to find a more pink, fluffy and feminine office than ours. We’d like to give you an insight into where we write up your inspirational stories.

It’s a tightly run ship, but the office is filled with pink wherever we can. Pink notebooks, pink highlighters, a large pink ‘Famous Features’ sign on the window (which the boring old fuddy duddies in the office next door deemed as tacky – jealousy is a terrible thing) and even a pink lamp. Oh, and did I mention the goldfish? Sadly not pink ones, but we’re working on it.

We work very hard, because selling your stories to the magazines is important to us. So consequently, we spend a lot of time in the office. For this reason, we’ve made it as pink, comforting and female friendly as possible. There’s always handcream in the drawer. There’s always chocolate in the fridge.

We think it’s only fair that we big up the fairer sex quite a bit. After all, it’s your stories of strength, courage and inspiration that make Famous Features the number one press agency for selling your story that it is.

We often look back on stories we’ve sold to magazines and newspapers (such as the Daily Mirror, the People and The Sun) and wonder how the people in that story are getting on. It’s hard not to get personally involved when you’re talking to such incredible people all day.

Take Diane Vinall, for example. We sold her story to That’s Life a couple of months ago. She was absolutely devastated, as any loving mother would be, when her son Stephen was found in East Brighton park last year. He was just 32 years old. Stephen had been a heroin addict for years, and the inquest ruled an overdose as the cause of his death. But Diane isn’t happy with this verdict – she believes he was murdered.

Her story is a touching message of undying love and devotion to her son – she will never give up fighting to find out what really happened the day he died.

Or Jeanette Salmons (nee Sambucci), who remarried her first hubby Malcolm last month 39 years to the day after they married the first time. They were 16 and 18 the first time round, and not quite ready for marriage.  They went their separate ways and married new partners – but realised they belonged together after bumping into each other at a family gathering years later.  We were so inspired by this story of true love – theirs really is ‘in sickness and in health.’ It appeared in the ‘Your Life’ section of the Daily Mirror on Friday November 20, and we thoroughly enjoyed working with them.

We sold Sylvia Davies’s story to Chat, after she was attacked on Boxing Day 2007 by her abusive ex-partner. She’s since rebuilt her marriage and kicked her alcoholism.  She gave birth to her gorgeous baby girl, Emily Rose, a year ago, and we couldn’t be happier for her.

All these incredible women (and there are many more, believe us), just prove that us girls really are the best. Long live the sisterhood, and keep sending us your inspiring stories, ladies!

(Don’t worry, we do sell male orientated stories as well, and we have boys in the office  – but they have to put up with the pink). 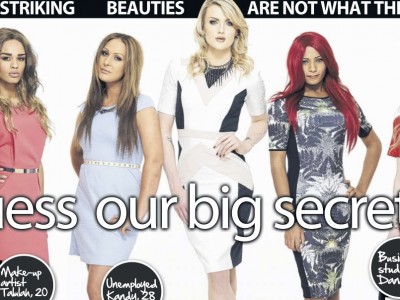