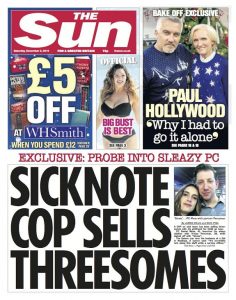 A COP on sick leave has been selling threesomes with his girlfriend for £210 an hour.

PC Daniel Moss, 41, launched his sleazy sideline with Tracey Perryman, 38, while signed off with “stress”.

PC Daniel Moss, 41, runs the business at a flat in Hastings with his girlfriend

The Sussex cop runs the business at a flat in Hastings. A source said: “It’s incredible he’s doing this stuff while a serving officer.”

Sussex Police have now launched a probe into the conduct of Moss, who could be disciplined or sacked for gross ­misconduct.

The source added: “He’s doing it right under the noses of his bosses at Sussex Police — he’s so brazen, I can’t believe he’s getting away with it.”

He launched his sleazy sideline with Tracey Perryman, 38, while on ‘sick leave’

Yesterday the sex-mad pair shut down their profile on an escorts website as the investigation began.

It had said: “Me and my boyfriend were swingers prior to taking up escorting and we thought . . . Hey let’s give it a go, why not do something you love doing as a job?

“So here we are and I am here for your pleasure.”

It added: “Look at me and you’ll think I’m the girl next door, look at us as a couple and we’re a young energetic couple who you could pass on the street . . . get us in the bedroom and we can be as filthy as you want, as long as I get some c*** I’m happy, and I’m happy to take requests.”

Moss and Perryman were thought to be raking in up to thousands of pounds a month from their business at a two-bed flat near their semi in Hastings, East Sussex.

Both drive white BMWs. Moss has a sporty 1 Series while Tracey has a £24,000 2 Series Gran Tourer.

Get us in the bedroom and we can be as filthy as you want, as long as I get some c*** I’m happy

But “jobless” Tracey also allegedly claims benefits as a single mum after splitting from her factory worker husband Paul Brabon, 37.

Her “Secrets 2016” profile on website adultwork.com had said that she is 29 and her boyfriend is 34 — much younger than their real ages.

She was wearing denim shorts and a loose white top. Calling herself Marie, she led our man through to the kitchen and introduced Moss by his real first name, Dan.

The PC, in jeans and a T-shirt, offered our reporter a cup of tea and started casually talking about the weather.

The modern flat was clean and well furnished — with wrist restraints attached to a door.

After handing over £120 in cash, our man was led to a bedroom where Tracey sprawled herself on the double bed.7

Moss said he was as “straight as they come” but was willing to indulge in homosexual activity with clients if that is what they want. He said: “Whatever pays the bills. She’s always pushed her boundaries, so, you can’t knock it til you’ve tried it is my adage.”

Tracey added: “As a general rule it’s more people doing stuff to you, rather than you doing stuff to them, isn’t it?” As she writhed seductively on the bed, Dan explained: “This plays out however you want to do it.

“If you just want to watch me and Marie then that’s fine.

“My view is I love seeing Marie playing with other people. I’m not here to intimidate you.”

I love seeing Marie playing with other people. I’m not here to intimidate you

The couple have not broken the law by selling sex as working as a prostitute in private is not a criminal offence.

It is only an offence to solicit in a public place or to profit from prostitution by running a brothel or pimping.

But the police code of ethics states that officers must “avoid any activities (work-related or otherwise) that may bring the police service into disrepute and damage the relationship of trust and ­confidence between the police and the public.”

A snap from his girlfriend’s profile on the escorts website

Twice-wed Tracey dumped second husband Paul after becoming obsessed with Moss when he was dating her younger sister aged 35.

The source said: “Tracey was just an ordinary married woman until she got involved with Dan.

“She’s become obsessed by sex since she met him.”

They launched their prostitution business in July, first creating a profile on the adultwork.com website — around the time Moss went on long-term sick leave.

The source said he has been signed with “stress” for the past “three or four months”.

The couple appeared to entertain at least two clients each day.

Last weekend they celebrated their one-year anniversary with a trip to London.

They posted snaps on Facebook as they had a meal at Planet Hollywood, went to the cinema and went ice skating.

Tracey posted: “Happy anniversary Daniel. Can’t believe how quick a year has gone I have loved every minute . . . love you so much.”

Moss posted: “Happy anniversary baby, it has gone quick, put those sceptics to rest who thought I’d be gone by now, can’t wait for the next twelve months.

“What doesn’t break us makes us stronger xx.”

When The Sun approached Moss yesterday he said: “I have nothing to say.”

A police spokesman said: “Sussex Police Professional Standards Department has received an allegation about an officer. The investigation is in a very early stage. 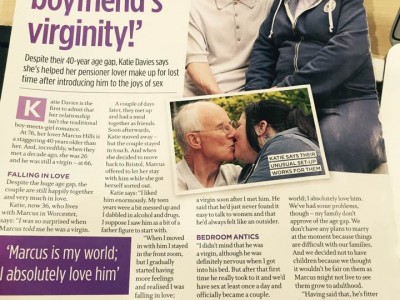