When Daisy was at school she was bullied for being overweight, it went on for years until she decided to try and become as thin as the girls’ who hated her.

The doctors didn’t originally diagnose Daisy with an eating disorder, so she wanted to lose more weight, because she felt she wasn’t “good enough” at anorexia.

So in desperation she turned to laxatives taking on average 120 laxatives a day, on one day she took 220! She couldn’t work or even leave the house as she spent most of the time on the toilet. When she went out of her home, often have embarrassing accidents.

From the age of 20 to 22 ½ she was addicted to laxatives, taking about 110,000 and spending over £20,000, she would have to go to different chemists to ensure the pharmacists did not become suspicious.

Eventually when she was just over 5 and a half stone she was diagnosed with anorexia, she had finally achieved her goal, but she wasn’t eating and the only things she ingested were more laxatives.

She was hospitalised for a time and given regular counselling sessions, and now hasn’t taken laxatives for almost 2 years. She was lucky and is now working as an actress and model.

She says, “I just wanted to be slim and I thought if I had nothing in my stomach at all times, that I would be fine. It worked but at what cost, it nearly killed me.”

“I just want to let people know there is no quick fix, laxatives are embarrassing, nobody wants to spend all day on the toilet, especially a young woman”. 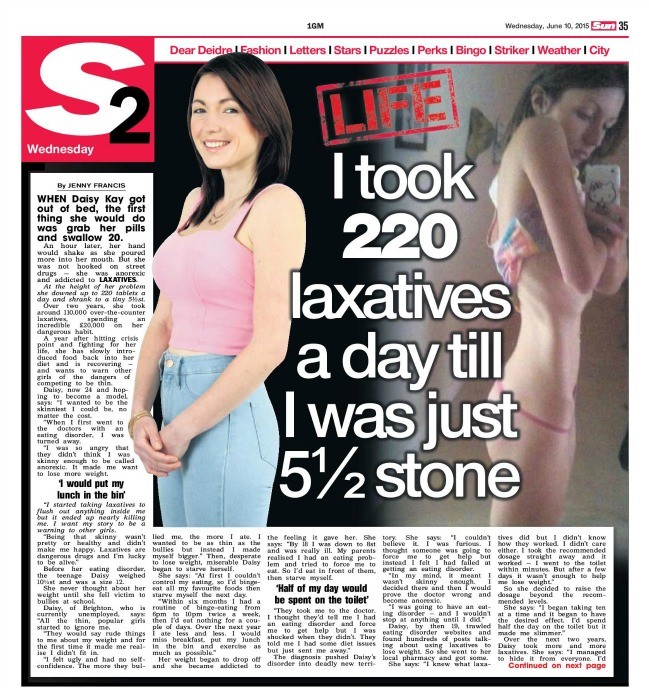