My daughter’s best friend is a skunk! When animal handler Maria, 30, adopted Humbug the skunk she struggled to tame the elderly animal ... until 7-year-old Harriet stepped in 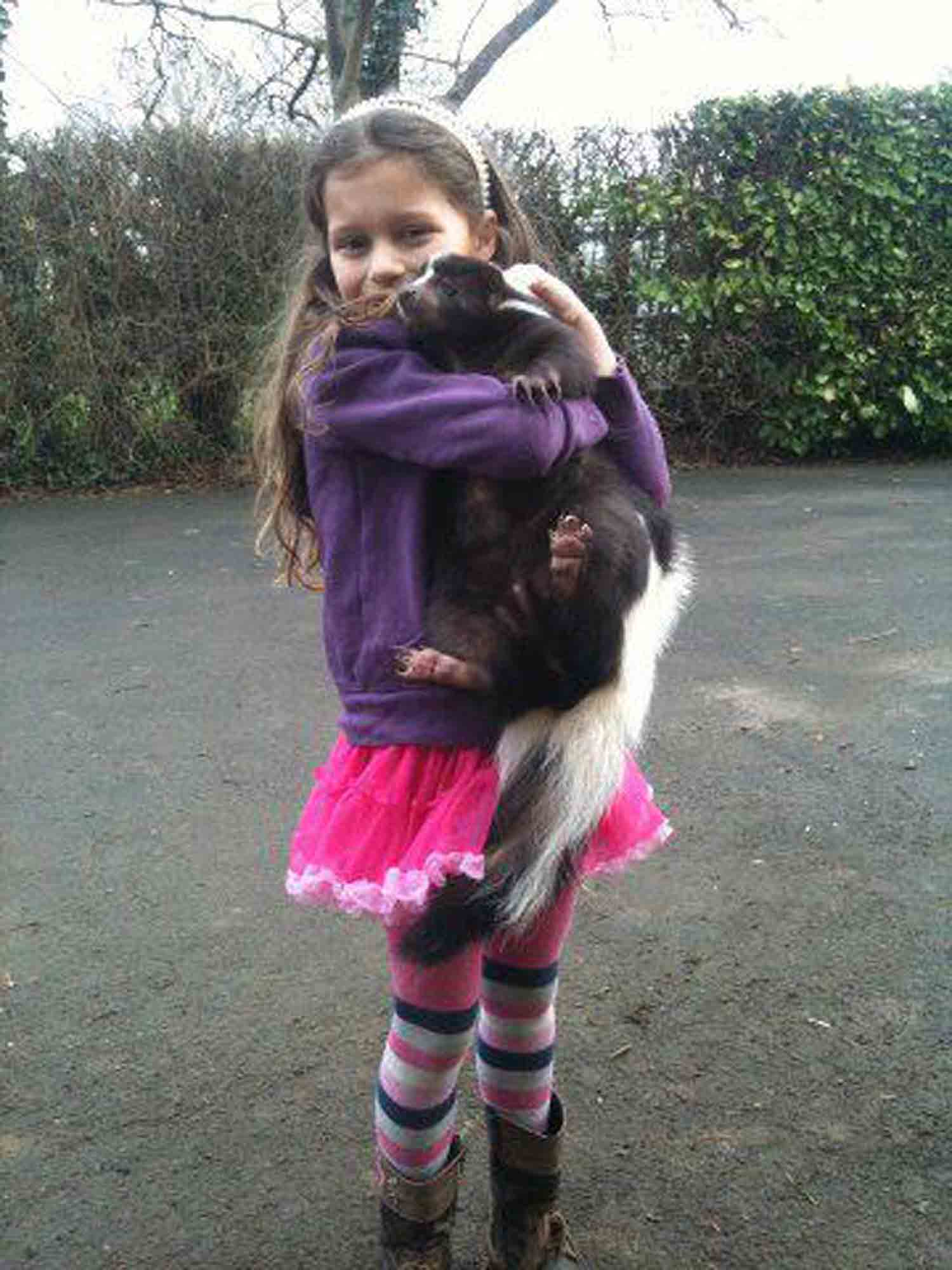 MARIA’S STORY WAS SOLD TO ‘PICK ME UP’ MAGAZINE BEFORE APPEARING IN ‘THE SUN’ AND ‘DAILY EXPRESS’. IT WAS THEN PICKED UP BY A NUMBER OF OTHER MEDIA, INCLUDING BBC AMERICA AND ITV NEWS, AND LATER RE-APPEARED IN A ‘PICK ME UP’ MONTHLY SPECIAL.

As my daughter, seven-year-old Harriet, stepped into the front room her mouth dropped open.

“Oh, Mum, what have you done?” she squealed.

Her wide eyes scanned the room. It was crammed full of animal cages.

With an animal handler for a mum, Harriet was used to seeing exotic beasts roaming around the house.

We already had a pot-bellied pig, Dinky, sharing our sofa, and creepy crawlies in every corner. But during the day, in December 2011, our collection of critters suddenly doubled.

I’d had a call off another handler who was selling up and I just couldn’t resist taking them all.

Most of the animals, including reptiles and a wild Asian dog, were quick to settle into their new home. But one, Humbug, an elderly skunk, turned out to be a handful.

Me and my husband, Ian, 34, couldn’t get close without him pouncing for our fingers.

Strangely, though, Humbug took a shining to Harriet. She could scoop him up for a cuddle without him so much as batting an eye.

“What’s so special about you?” I joked.

“I think you’ve found yourself a pet there!” I laughed.

As the only human that could handle him, Harriet started to feed and clean Humbug and take him for walks on a lead.

She became besotted with him. And they would do everything together.

He started sleeping in her bedroom – either cuddled up next to her in bed or in his very own drawer. They would play in the garden together, too.

I’d laugh as Harriet ran around, Humbug trotting close behind trying to keep up.

It wasn’t long before Harriet started calling Humbug her best friend. And it was obvious he felt the same.

Skunks stamp their feet when they’re threatened and Humbug would do it if I ever raised my voice to tell Harriet to tidy her room. He’s her bodyguard!

I’m just lucky he can’t spray me – he’s had his scent glands removed.

Humbug also comes with me to collect Harriet and her brother, Peter, five, from school and  they cuddle and play all the way home.

They really are inseparable. But in May we thought their friendship was over – Humbug went missing.

Harriet’s door was ajar one night so I tiptoed in to make sure everything was okay. Humbug wasn’t there. I couldn’t find him anywhere. He’d escaped through the cat flap!

As I quietly searched Harriet’s room again she wriggled awake and noticed Humbug wasn’t beside her.

“It’s okay,” I soothed. “He’s asleep in his drawer. I’m just looking for your school uniform.”

She knew something was up, though. And at 4am, dressed, she came to me with tears in her eyes.

I nodded. I had to tell the truth.

That day, we walked for miles trying to find him. Harriet even made lost posters to pin up around the neighbourhood.

There was no sign, though, and Harriet was distraught. But then, a couple of nights later, a neighbour called to say Humbug was in her garden.

“I’ll be right there!” I yelled, before racing down the street.

Back at home, I put Humbug straight into bed with Harriet. She was still sleeping, but wrapped an arm around him.

Then, suddenly, she sat bolt upright and screamed, “Humbug! Humbug!”

Humbug hasn’t left her side since. And she’s done such a good job taming Humbug that I now use him for my business, Amazing Animal Encounters.

He’s brilliant with kids during petting sessions. He even lets me give him cuddles now. I’ll never compare to Harriet, though – Humbug still stamps his feet at me!