I grassed up my son for murder after watching Crimewatch 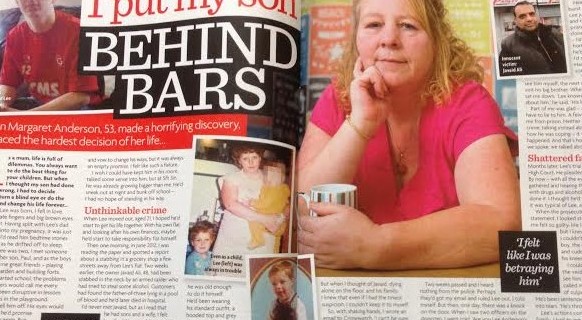 Margaret Anderson, 53 was left with an awful decision, a moral judgement that could only end badly.

“Are you Ok mum? My son Paul says, after I pick up the phone.

But I won’t be seeing him any time soon, he is in jail for 15 years, and I was the one that put him there.

I split from Lee’s father shortly after his birth and Lee, 32 has regularly been in trouble ever since he was a little boy, falling into a life of crime at an early age.

He’s been in and out of custody from when he was 13. Even when he was in primary school I was being called in about every two days to deal with him. They said he was being disruptive all the time.

But I’ve always been there for him, no matter what his problems. There was a lot of arguing though – he was an angry boy. I lost track of the amount of time he was arrested over the years, but I still loved him; he is my son. I constantly worried what he would do next, but I never thought he was capable of killing a man.

As I sat down to watch Crimewatch one evening, my life fell apart, the BBC show was running a reconstruction of the killing of a popular local shopkeeper stabbed in his store. It wasn’t far from our home and I was worried one of my sons might have been involved Lee, Paul, 31 and Patrick, 27 had all been in trouble with the law.

Avaid Ali, 48, was found by customers lying in a pool of his blood from a severed artery in his neck.

He died from brain damage in hospital and 60 police were involved in a hunt for the culprit. A reward of £50,000 was later offered for his arrest. But after hitting a dead end, detectives turned to the hit BBC show and a reconstruction was shown.

The first I knew about the killing was a piece in the local newspaper looking for witnesses. A lot of people were talking about it then someone said it had been on Crimewatch.

I watched the episode and as soon as I saw the reconstruction I froze. I recognised the clothing. It was the kind of thing Lee would wear and the man had the same kind of physical features.

For the rest of the night, I could not get the suspect’s image out of my mind.

Then, nervously, I opened up my computer and began typing out an email to send to Crimewatch.

It was not just the clothes – the incident happened in an area Lee hung around in. When I sent the email, I was so apprehensive. I didn’t know how to word it. I basically sent it to rule him out.

I wrote that I wasn’t sure that it was him. Afterwards different thoughts were going through my head. What will people think of me? Lee will probably hate me. I never spoke to anyone about it. I just sat in the house for a couple of days. I never told anybody, not even my partner. Then, when I heard nothing back, I thought that was it, I must have been mistaken and they got the right person for the horrific crime.

I assumed he had been ruled out, but my relief turned to horror a few days later. I walked into the kitchen, to put the kettle on and he was there. I was at the washing machine taking the clothes out when he turned to me:

He started laughing. And I said, ‘That’s not funny’.

A chill ran down my spine as I realised just what Lee meant.

Then he went out into the garden and said to my fiancé.

“Did you see that? I told my mum it was me and she got a fright.”

Weeks later the police, by now watching Lee, arrived at my door to talk to me about that email. I broke down and told officers about my son’s kitchen confession.

At the trail his brother Paul refused to admit to the statement he gave to the police and was jailed for a year for contempt of court.

However, in court I was still in turmoil and couldn’t be 100% sure he wasn’t joking when he made that comment or was it a confession? But why would anyone joke about that?

Regardless, my statement was read to the jury and he was convicted of the crime, I was told after the case, that my words had clinched the trial. I had sent my own son to prison.

He was charged with murder and denied it. But a jury at Glasgow’s High Court found him guilty of the lesser charge of culpable homicide and was given 15 years in September 2013.

It emerged during the trail that after leaving Mr Ali dying in his Sunshine grocers store in Paisley in June 2012, Lee cashed in a PSP device and game for money at a nearby shop so he could buy heroin.

It wasn’t over and the fall-out from the case meant I became under threat in my own home and I had to move to another town, with the police force’s help. My health has deteriorated rapidly due to the stress of what has happened.

I am now focused on rebuilding my relationship with Lee and since being in jail, he has been working hard on dealing with issues that have plagued him for years.

I first spoke to Lee about two weeks after he was convicted, it was the most difficult call of my life. We now correspond through email as well.

He’s been seeing a psychologist since he’s been in. It was only last year that he learned to tell the time. I am hoping he will be able to rebuild his life – and that I will be a part of it.

I was shocked. I know I did the right thing within the law, but my own conscience is torn. That shopkeeper was an innocent man though, and he deserved justice. I just wish it hadn’t been my son who was the perpetrator. It is heart braking to know your son has killed someone, and my heart goes out to that shopkeeper’s family, he didn’t deserve to die. I don’t think I could have lived with myself if I had kept that secret and he was still a free man.

He is currently in Shotts prison in Lanarkshire and we speak regularly on the phone. I hope his sessions with a psychologist will pave the way for an early release. Just last week on the phone, he said to me, ‘We don’t play the blame game’. It seems like we’re more loving now he’s in the jail. It’s like we’re talking more about things.